Video: Lego Space Shuttle Lifts Off for the Stratosphere

So many intrepid stratonauts send stuff into the upper atmosphere these days, it’s almost hard to keep track — there’s even a suborbital balloon factory now. But this weather balloon experiment still caught my eye. It’s a little space shuttle, winging its way into orbit one more time...in Lego form.
Romanian shuttle enthusiast Raul Oaida posted this video to YouTube of his hand-made Lego Space Shuttle kit to prove that “although retired, this machine can still fly, albeit in toy form.” He filled a weather balloon with helium and rigged it with a GPS device and a high-definition camera, launching on New Year’s Eve from a field in central Germany. He used the GPS to recover the device 240 kilometers south of where it launched. 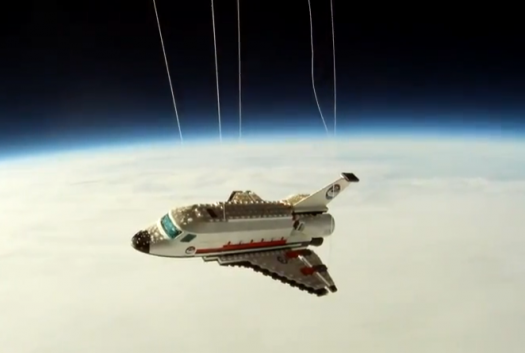 Full post: Video: Lego Space Shuttle Lifts Off for the Stratosphere
Email ThisBlogThis!Share to TwitterShare to FacebookShare to Pinterest
Posted in: Varieties