Under skies darkened by thick clouds, they pour out into the streets, clanging with the sound of giant bells. Soon they will enter the houses of the villagers – by force if they should so choose. Their faces are a terrifying mix of snapping jaws, twisted horns, and large, unblinking eyes. They are clad in animal skins and furs, or other thick materials, and the bells whose clanking din fills the air dangle from their belts. These monsters do not speak, but rather walk and dance their way through ancient rites while armed with various weapons. And the rituals stretch back millennia to a time when pagan gods were worshiped and evil spirits were considered serious menace.
Each year, on a day soon after New Years and before Lent, the festival of Kukeri is celebrated in Bulgaria. It is a tradition that may date back as far as 4,000 years to the ancient Thracians – and to Dionysus, the Thracian and Greek god associated with wine, fertility, and rebirth. The festival is replete with mystical symbolism, steeped as it is in a tradition representing the cycle of life, death and rebirth. 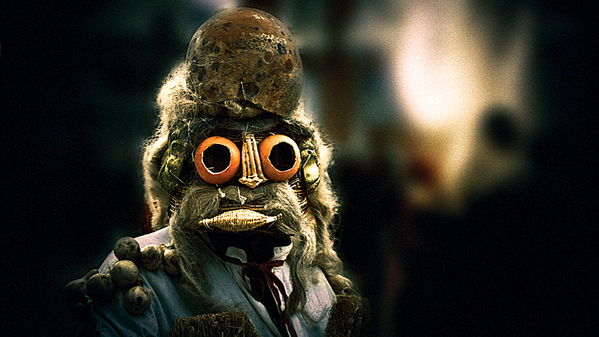