Durdle Door is a natural limestone arch on the Jurassic Coast near Lulworth in Dorset, England. It is privately owned by the Welds, a family who own 12,000 acres (50 km2) in Dorset in the name of the Lulworth Estate. It is open to the public. The name Durdle is derived from an Old English word 'thirl' meaning bore or drill.The arch has formed on a concordant coastline where bands of rock run parallel to the shoreline. Here the rock strata are nearly vertical, and the bands of rock are quite narrow. Originally a band of resistant Portland limestone ran along the shore, the same band which can be seen one mile down the coast forming the narrow entrance to Lulworth Cove. 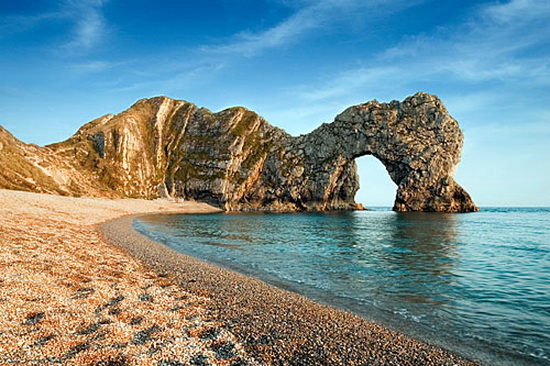