The Adams River is a tributary of the Fraser River in British Columbia, Canada. During mid-October millions of sockeye salmon run through this river and concentrate near the river mouth for breeding, an event that occurs once every four years. As many as 10 to 15 million salmons battle the Fraser River and the Thompson River to reach the 12 kilometer Adams River - the final stop to their 4,000 kilometer journey - where they spawn and die. While the sockeye return every year, the migration that occurs every fourth year (2010, 2014, 2018...) dwarfs the others.
Adams River sockeye travel from their spawning grounds to the South Thompson River, then into the Fraser River, and enter the Pacific. From the Strait of Georgia, they spend three years in the open ocean following Arctic currents to Alaska and the Aleutian islands. They then retrace their route to the Adams, completing a round trip of over 4,000 kilometers. At this point their numbers are reduced to about 2 million. They complete the arduous trip upstream, including navigating the swift waters and rapids of the Fraser Canyon, in just seventeen days. Unbelievably, the salmons do not eat during this period, instead relying on fat reserves stored up from heavy feeding in the Strait of Georgia in the late summer. It is at this point that the salmon take on their distinctive red hue, with the male fish also developing large humped backs and aggressive hooked mouths. 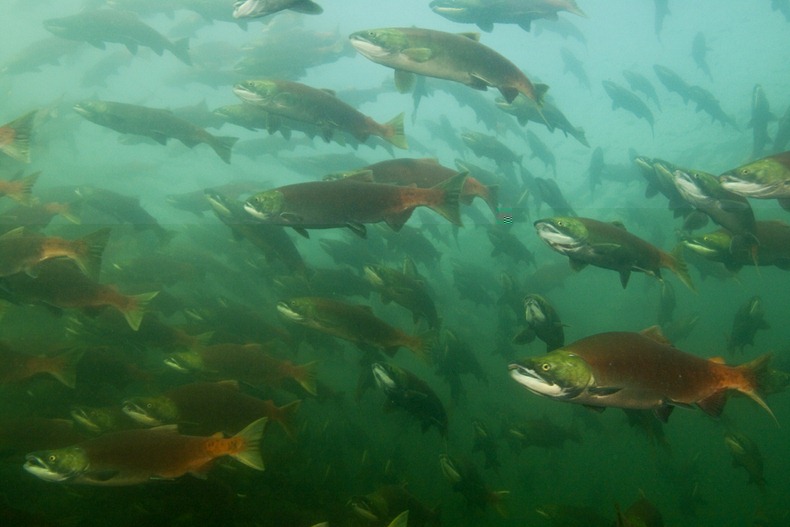