When Peter Jackson spotted the Alexander Farm during an aerial search of the North Island in Matamata in New Zealand for the best possible locations to film The Lord of The Rings film trilogy, he immediately thought it was perfect for Hobbiton, the village where the Hobbits live. He began preparing the site in March 1999 for filming that was to commence at the end of the year.
The New Zealand Army was brought in to build 1.5 km of road into the site. They brought diggers, bulldozers, loaders, trucks, rollers, graders and other heavy machinery to the site. Thirty-seven hobbit holes were created on the hillside with untreated timber, ply and polystyrene. Barberry hedges and trees were brought in and gardens were nurtured throughout winter. Thatch on the pub and mill roofs was cut from rushes around the Alexander farm, and oak tree overlooking Bag End was cut down and brought in from near Matamata. Each branch was numbered and chopped, then transported and bolted together on top of Bag End. Artificial leaves were imported from Taiwan and individually wired onto the dead tree. For nine months, 400 people toiled each day to convert this hitherto unknown place into Middle Earth.
Today, only 17 of those hobbit houses remain and they have been taken over by sheep. In 2011, the set was completely rebuilt for the feature films "The Hobbit" and now remain as permanent exhibit and tourist attraction for fans. 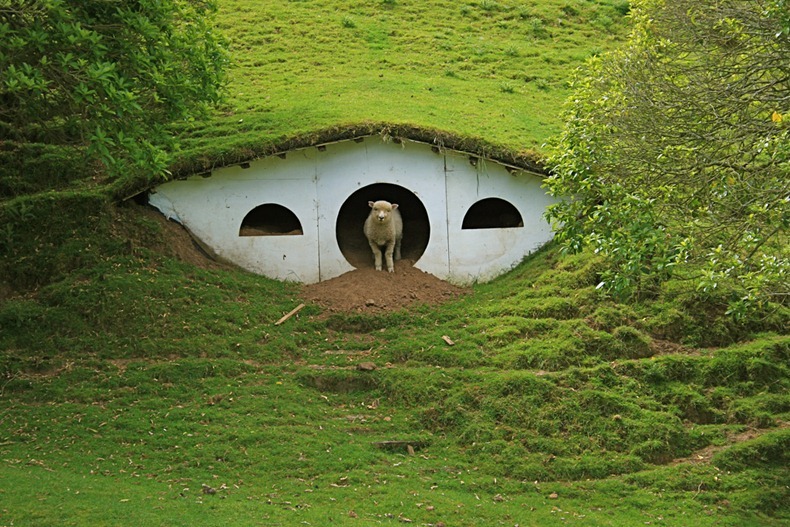