Qiandao Lake or the Thousand Island Lake is located in Zhejiang, China, about 150 kilometers from the city of Hangzhou. It is an artificial lake formed after the completion of the Xin'an River hydroelectric station. In 1959, in order to build the Xin'anjiang Reservoir the valley was flooded with water resulting in a lake or reservoir 573 square km in area and with a storage capacity of 17.8 cubic km. The lake is so called because it is dotted with 1,078 large islands and a few thousand smaller ones across it.
Qiandao Lake, known for its clear, and sometimes drinkable water, is used to produce the renowned Nongfu Spring brand of mineral water. It is also home to lush forests (over 90%), and exotic islands. In recent times, it's been turned into a tourist spot with themed islands that include Bird Island, Snake Island, Monkey Island, Lock Island (featuring supposedly the world's biggest lock), and the Island to Remind You of Your Childhood.
But what lies underneath the lake is perhaps more interesting and worthy than the lake itself.
Before the valley was flooded, there stood at the foot of the Wu Shi mountain (Five Lion Mountain) two magnificent ancient cities - Shi Cheng and He Cheng. Shi Cheng was built more than 1300 years ago in 621 AD during the Tang dynasty (AD 618-907) and was once the center of politics, economics and culture. He Cheng is even older: established in 208 AD during the Han dynasty (AD 25 - 200) as a business hub along the Xin'anjiang River. 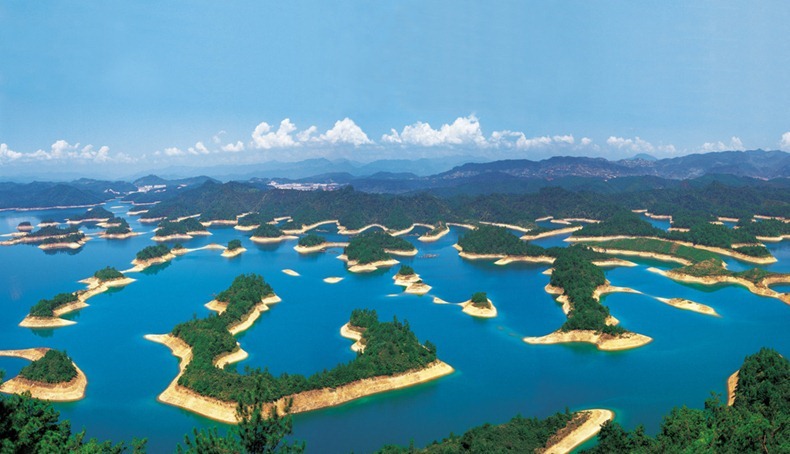