For 10 winters from 1985 to 1995, snowmen met with murder and mayhem at the hands of 6-year-old Calvin in the Calvin and Hobbes comic strip written and illustrated by Bill Watterson. The hilariously horrific snowmen scenarios depicted by Calvin still continue to inspire fans who create snowman scenes straight out of a snowman’s worst nightmare. Got snow? Why not brave the cold and craft your own Calvin and Hobbes-esque snowmen creations to keep your neighbors wondering and a bit worried about you? Think dark humor such as stabbing, melting, maiming, murdering, or other mayhem. Think snowman + nightmare = snowmare. Your twisted snowy tribute is on the right track so long as your snowman will definitely not live happily ever after. Calvin specialized in wicked plots to bring about snowman suicide, a snowman cannibalizing another snowman, and a Snowman House of Horror. Snow sharks around the world have been seen attacking horrified snowmen. Here’s some really good snow art tributes, by people deeply inspired by Watterson, but it speaks loudly of the world in which we live . . . where a photo depicting a famous comic strip and turned into snowmen nightmares and Calvin and Hobbes in real life must be qualified as a ‘reproduction.’ Perhaps SOPA will move beyond trying to destroy the Internet and making websites disappear, to making houses and yards go poof? As sad as this fact is, we’re claiming ‘fair use’ for Bill Watterson’s Calvin and Hobbes comics in this tribute and ‘fair use’ for the the imaginative people who reproduced Calvin & Hobbes in real life snowman scenes 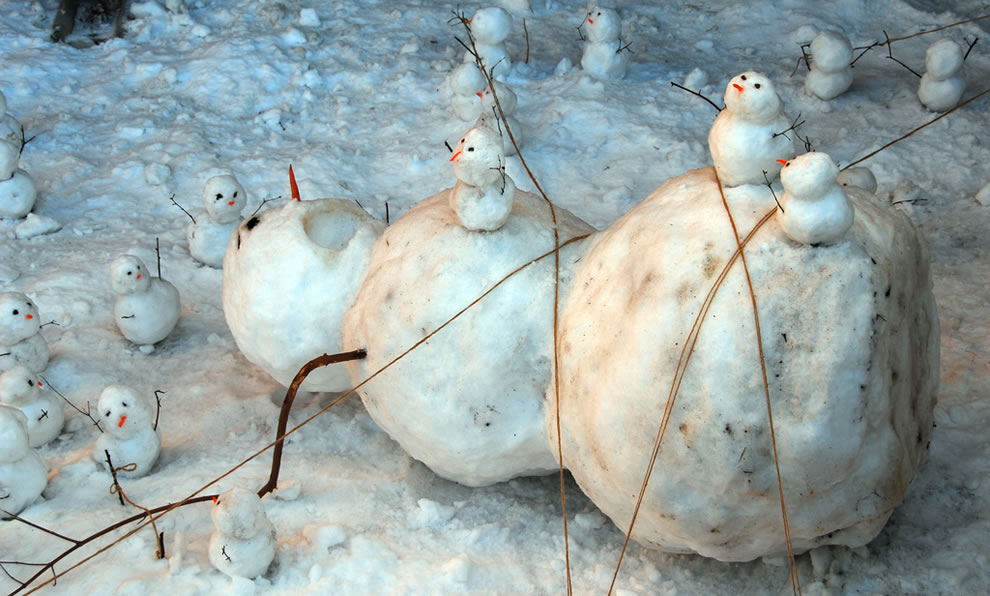