When Hearts on Power Lines Help Us Feel the Love


There is a big difference between standing in front of the Mona Lisa in the Louvre and contemplating the graffiti on your local grocery store. Still, street art is fascinating. There is just something about it that grabs people from the get-go, whether it is graffiti, shoefiti or something as off-the-wall as an interactive zombie statue. Unfortunately, street art has often gotten a bad rap. “It means this is gang territory!” people say; or, "that shoe hanging up there means someone got shot!”
Whether these trumped-up charges have any truth to them doesn’t really interest us at the moment. The point is that graffiti and shoefiti often have negative connotations. However, Ana Rivero Rossi, an artist and native of Spain currently living in San Francisco, reckons shoefiti is a kind of cultural code or language. What's more, she was interested in using this same method to transmit a positive and understandable message. So she created a street art project called “Aquí Love”, which basically involves throwing pairs of hearts up onto power lines. 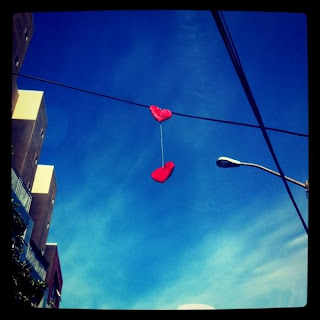 Full post: When Hearts on Power Lines Help Us Feel the Love
Email ThisBlogThis!Share to TwitterShare to FacebookShare to Pinterest
Posted in: Art