McMurdo Dry Valleys of Antarctica: The Driest Place on Earth


Antarctica is covered with ice, but not all of it. The McMurdo Dry Valleys is almost entirely snow free. Located among mountains by McMurdo Sound, on the part of Antarctica closest to New Zealand, the valleys receive the equivalent of only 10 cm of water, on average, each year in the form of snow. Completely devoid of terrestrial vegetation, the region is considered one of the most extreme deserts and the driest place on the planet. At 4,800 square kilometers, the valleys constitute around 0.03% of the continent, and form the largest ice-free region in Antarctica.
The Dry Valleys are so different from the rest of the continent because of its location. The Valleys are nestled between the mile-high Transantarctic Mountains which block seaward flowing ice from the East Antarctic ice sheet from reaching the Ross Sea. Several tongue-like glaciers creep through the gaps, but any ice that breaks off of the glaciers quickly goes from solid to vapor in the arid atmosphere. The unique conditions in the Dry Valleys are also caused, in part, by katabatic winds; these occur when cold, dense air is pulled downhill by the force of gravity. The winds can reach speeds of 320 kilometers per hour, heating as they descend, and evaporating all water, ice and snow. 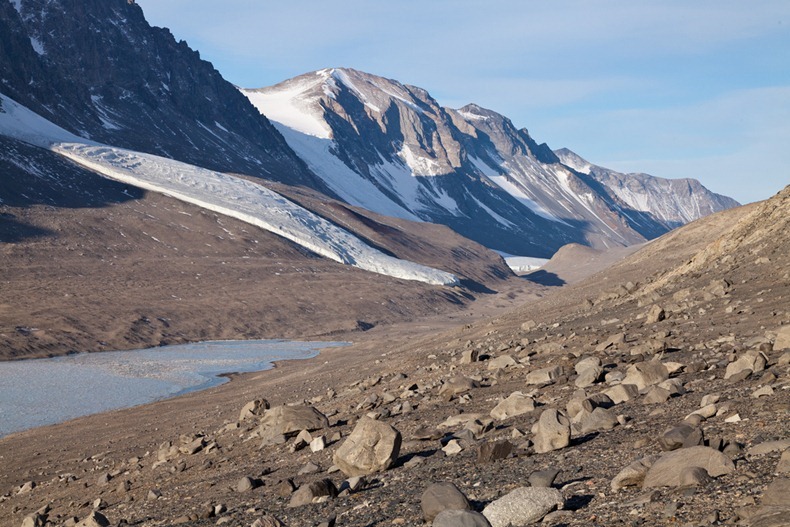