Airplanes That Carry Other Airplanes


A cargo aircraft also known as freight aircraft is specially designed for carrying goods, rather than passengers. They are usually devoid of passenger amenities, and generally feature one or more large doors for the loading and unloading of cargo. Aircraft designed for cargo flight usually have a number of features that distinguish them from conventional passenger aircraft: a "fat" looking fuselage, a high-wing to allow the cargo area to sit near the ground, a large number of wheels to allow it to land at unprepared locations, and a high-mounted tail to allow cargo to be driven directly into and off the aircraft.
The biggest and heaviest cargo carrier is the Antonov An-225 Mriya introduced into service in 1988. The Antonov An-225 was designed to airlift the Energia rocket's boosters and the Buran space shuttle for the Soviet space program. The An-225 can carry ultra-heavy and oversize freight, up to 250,000 kg internally or 200,000 kg on the upper fuselage.
The An-225 has become the workhorse of the Antonov Airlines fleet, transporting objects once thought impossible to move by air, such as locomotives and 150-ton generators. It has become an asset to international relief organizations for its ability to quickly transport huge quantities of emergency supplies during disaster relief operations. 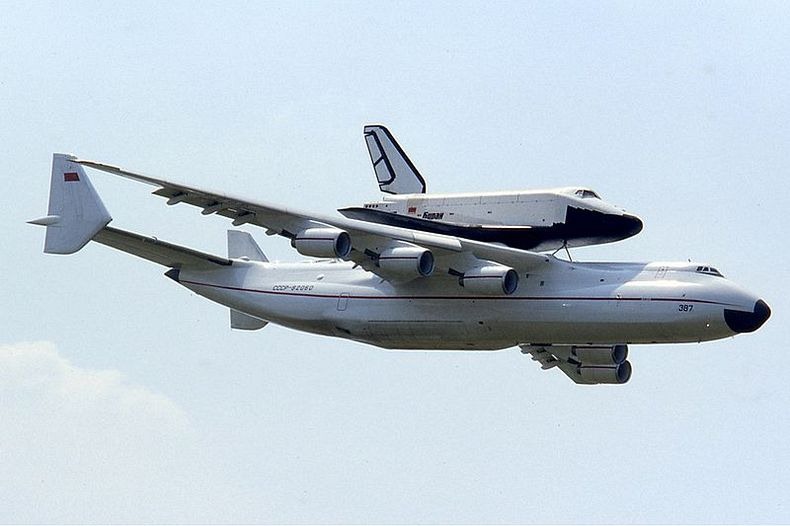 Full post: Airplanes That Carry Other Airplanes
Email ThisBlogThis!Share to TwitterShare to FacebookShare to Pinterest
Posted in: Technology, Varieties