The Faroe Islands is a group of 18 islands in the middle of the North Atlantic Ocean, northwest of Scotland and halfway between Iceland and Norway. The Islands have a population of nearly 50,000 and a language and culture of their own. The Faroe Islands are undeniably beautiful: green, rugged and wind-swept. The countryside is dominated by steep mountains, vertical sea cliffs and picturesque valleys. During summer, the Faroe Islands turn extraordinarily green and this is usually the best time to visit.
There are over a hundred villages in the Faroe Islands. Nearly every single one of them is situated near the ocean, and to new visitors they may all seem to be very much alike. The houses are either painted in bright colours or the traditional black, whilst the roofs are often turf covered. The buildings are usually built very close to each other, which is very cosy. In most places sheep occupy the outfield throughout the whole year.
Although the history of the Faroe Islands dates back to the 6th century, towns didn’t start to appear until very late. For instance, the capital, Tórshavn, only counted about 100 inhabitants in 1900, whereas today the number has escalated into nearly 20,000. In the Faroe Islands the traditional village was to a certain extent self-sufficient. When the fishing industry took off in 1872, it was the beginning of the end for the traditional way of life in the small villages as fishing replaced farming and the growing population chose to settle in the fast growing towns instead. 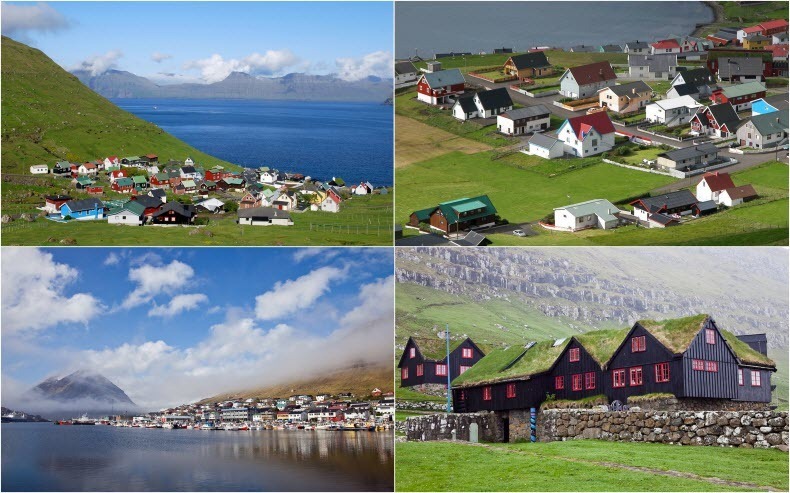