Floating around deep-sea rocks like a watery version of French filmmaker Albert Lamorisse’s red balloon, this bulbous, brightly coloured anglerfish was recorded by a remotely operated submarine camera off of California’s Central Coast in 2010.
While scientists have observed other species of anglerfish in the wild before, this particular species - Chaunacops coloratus - wasn't documented alive until 2002, explained Lonny Lundsten, a researcher at the Monterey Bay Aquarium Research Institute (MBARI).
The 2002 sighting was of a single fish found near a seamount, or extinct volcano, about 80 miles southwest of Monterey. In 2010 an expedition to the nearby Taney Seamounts found six more - enough to support a proper investigation of the species.
(Read more about seamount exploration in National Geographic magazine.)
In a new study - published in the journal Deep-Sea Research Part I - Lundsten and his colleagues describe the first observations of the rare fish in its natural habitat. C. coloratus, which can “walk” and changes colour throughout its life, was found nearly 11,000 feet (3,353 meters) below the surface. 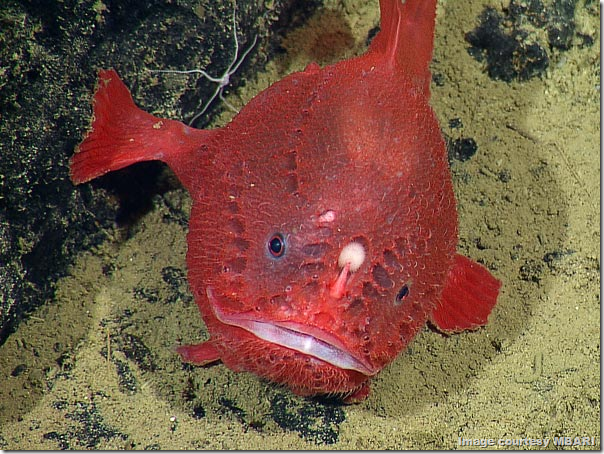