The Impenetrable Wetlands of Sudd in South Sudan


The Sudd is a vast expanse of swampy lowland region in central South Sudan, formed by the river White Nile. The area which the swamp covers is one of the world's largest wetlands in the Nile basin. Its size is highly variable, averaging over 30,000 square kilometers, but during the rainy season depending on the inflowing waters, the Sudd can extend to over 130,000 square km or an area the size of England.
The Sudd is drained by headstreams of the White Nile, namely the Al-Jabal (Mountain Nile) River in the centre and the Al-Ghazāl River in the west. In the Sudd, the river flows through multiple tangled channels in a pattern that changes each year. Papyrus, aquatic grass, and water hyacinth grows in dense thickets in the shallow water, which is frequented by crocodiles and hippopotami. Sometimes the matted vegetation breaks free of its moorings, building up into floating islands of vegetation up to 30 km in length. Such islands, in varying stages of decomposition, eventually break up.
The Sudd is considered to be nearly impassable either overland or by watercraft. Thick with reeds, grasses, water hyacinth, and other water loving plants, the Sudd can form massive blocks of vegetation that can shift position and block navigable channels creating an ever-changing network of water. Sometimes there is no channel a boat can travel on that will lead through the bog. For centuries this region has prevented explorers from travelling along the Nile and is only sparsely inhabited by the pastoral Nilotic Nuer people. 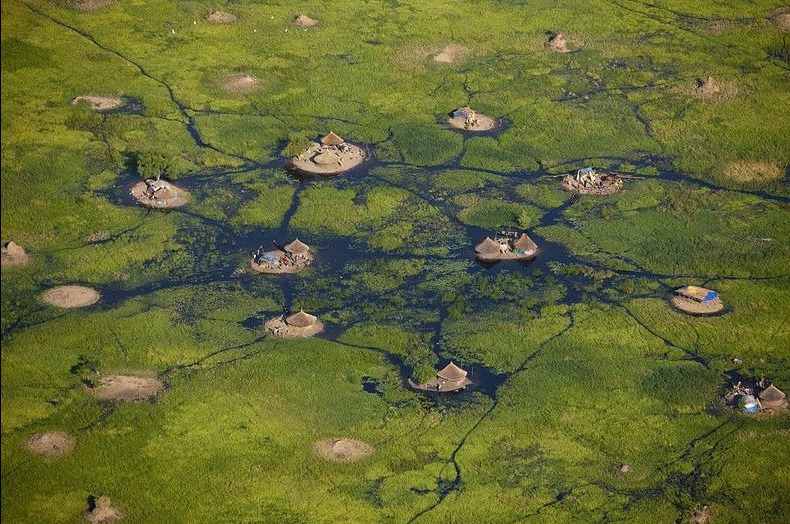 Full post: The Impenetrable Wetlands of Sudd in South Sudan
Email ThisBlogThis!Share to TwitterShare to FacebookShare to Pinterest
Posted in: Environment, Nature