THE MAN WHO HAS NOT BATHED IN 38 YEARS


A lot of people can’t imagine going through a day without taking at least one shower, but 66-year-old  Kailash Singh, from India, hasn’t taken a bath in over 38 years, and says he’s happier than a lot of people who wash their bodies every day.
But what can possibly make a man give up the daily ritual of bathing? Kailash says he told the decision in 1974, shortly after he got married, hoping this would help him have a son. He claims it was priest who guaranteed him a prized son if he followed his advice not to wash or cut his hair. Now, over 38 years later, Kailash Singh is probably the world’s smelliest man, has 6-foot-long dirty dreadlocks and is father to seven daughters and not a single son. Despite having been failed by his religious guidance, the old man still doesn’t want to wash his body, and says only a son could change his mind. Although stranger things have happened, fathering a son at 66, with a 60-year-old wife is very unlikely. 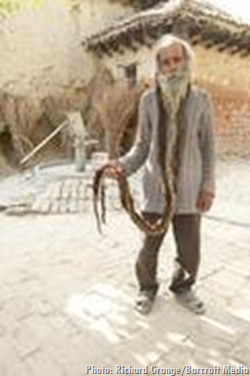 Full post: THE MAN WHO HAS NOT BATHED IN 38 YEARS
Email ThisBlogThis!Share to TwitterShare to FacebookShare to Pinterest
Posted in: Varieties, World wonders