Angel Falls is the tallest waterfall in the world, as well as the tallest single drop in the world and one of the eight natural wonders of the world. The waterfall is 979 meters high (3,212 ft) and it drops over the edge of the Auyantepui mountain in the Canaima National Park, a UNESCO World Heritage site in the Gran Sabana region of Bolívar State, Venezuela. Pilot Jimmy Angel is widely credited for discovering the falls in 1937, but the true discoverer was one Ernesto de Santa Cruz, who found the falls in 1910. The falls were subsequently named for Jimmy Angel, since he was the first westerner to view the falls. The height of the falls is so great that before getting anywhere near the ground, the water is atomized by the strong winds and turned into mist. The mist can be felt a mile away. 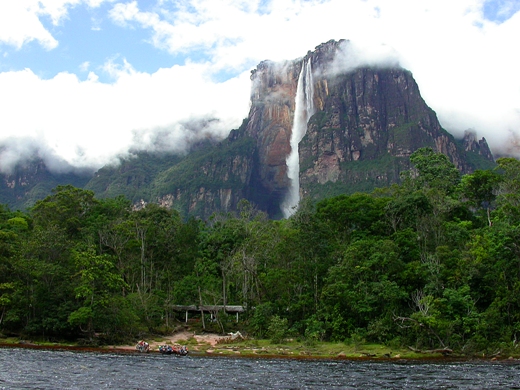